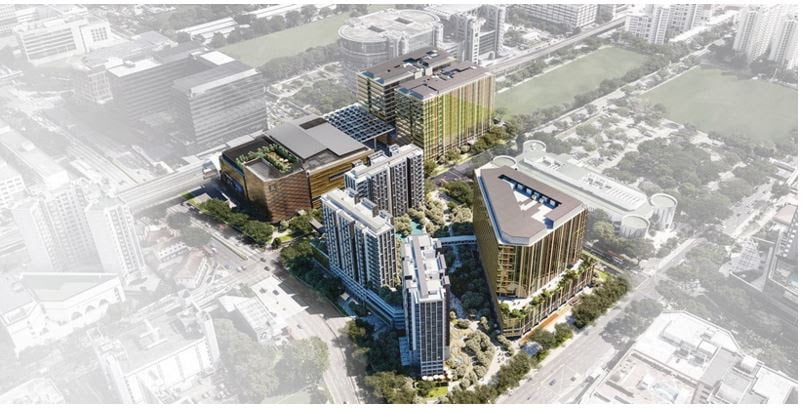 Australian property developer Lendlease has unveiled plans for its $3.2 billion Paya Lebar Quarter urban regeneration project, which is expected to transform the area around Paya Lebar Central into a regional centre.

The 99-year leasehold mixed-use development will feature a total of seven buildings, including three Grade-A office towers with a built-up area of close to one million sq ft, a 340,000 sq ft shopping mall which has already secured NTUC FairPrice Finest and Kopitiam as anchor tenants, and a 429-unit residential component called Park Place Residences.

He noted that Park Place Residences, which contains one- to three-bedroom units, will be launched in the first half of 2017.

(Estimated launch price for residential units is around $1500-$1600psf, with small units expecting to exceed $1700psf)

Average bids for executive condominium (EC) sites climbed from seven to 10 this year, while bids for private residential sites remained at 10.

In fact, the highest bid for a Sengkang site, which stands at $287 million, was 17 percent above the price of another nearby site sold in August 2014.

(High Park Residences buyers who bought last year should be happy now, as next year, developer needs to launch this project at 17% higher price to maintain the same profit margin)

A similar trend was also seen in the EC market, where prices have soared 16 to 25 percent from last year.

“We expect continued keen interest in the remaining three residential land parcels for launch in the next few months,” the report added.

No new housing projects were launched in September last month but developers sold more private homes in September. A total of 509 private housing units were sold in the month, compared to 341 units in the same period last year and 468 units in August.

Ong Teck Hui, National Director of Research & Consultancy at JLL, says “September is an uneventful month for new sales in the private residential market, but the next couple of months are expected to be more active and will provide a clearer indication of the direction of the market with the launch of The Alps Residences (626 units), Forest Woods (519 units), Queens Peak (736 units) and Parc Riviera (752 units).” He also notes that The Alps Residences and Forest Woods found keen interest amongst buyers and achieved good sales take-up.